The fourth edition of the European Industry and Energy Summit (EIES) took place Tuesday, Nov. 29 and Wednesday, Nov. 30, 2022, at the Brightlands Chemelot Campus. One of the items during this event was the final of a white paper competition for young professionals. The Brightsite team finished second with the white paper ‘Plasma for methane valorization: the flame that doesn’t burn.’

Three teams of young professionals took part in the final of the white paper competition: a team from Rijkuniversiteit Groningen (RUG), a team from TNO and a composite team from Brightsite, Maastricht University (UM) and Sitech, in short team Brightsite. The team participating from Brightsite presented an investment proposal in the field of plasma technology. The team consists of Zowi Maijer (Chemical Engineer at Sitech and involved in Brightsite’s program lines 1 and 5), Margherita Altin (PhD student UM, conducts computer simulation research on plasma at the Brightsite Plasma Lab), Maria Moreira de Azevedo (PhD student UM, focuses on methane conversion with plasma at the Brightsite Plasma Lab) and Martijn Ruijzendaal (Researcher at the Brightsite Plasma Lab). “For me, the climate challenge is an important driver. It’s great to see how much motivation there is here at the Chemelot site to use electrification to tackle climate problems. Plasma is a beautiful technology that can contribute to this, it is special to work on this as a PhD student,” said Martijn Ruijzendaal. 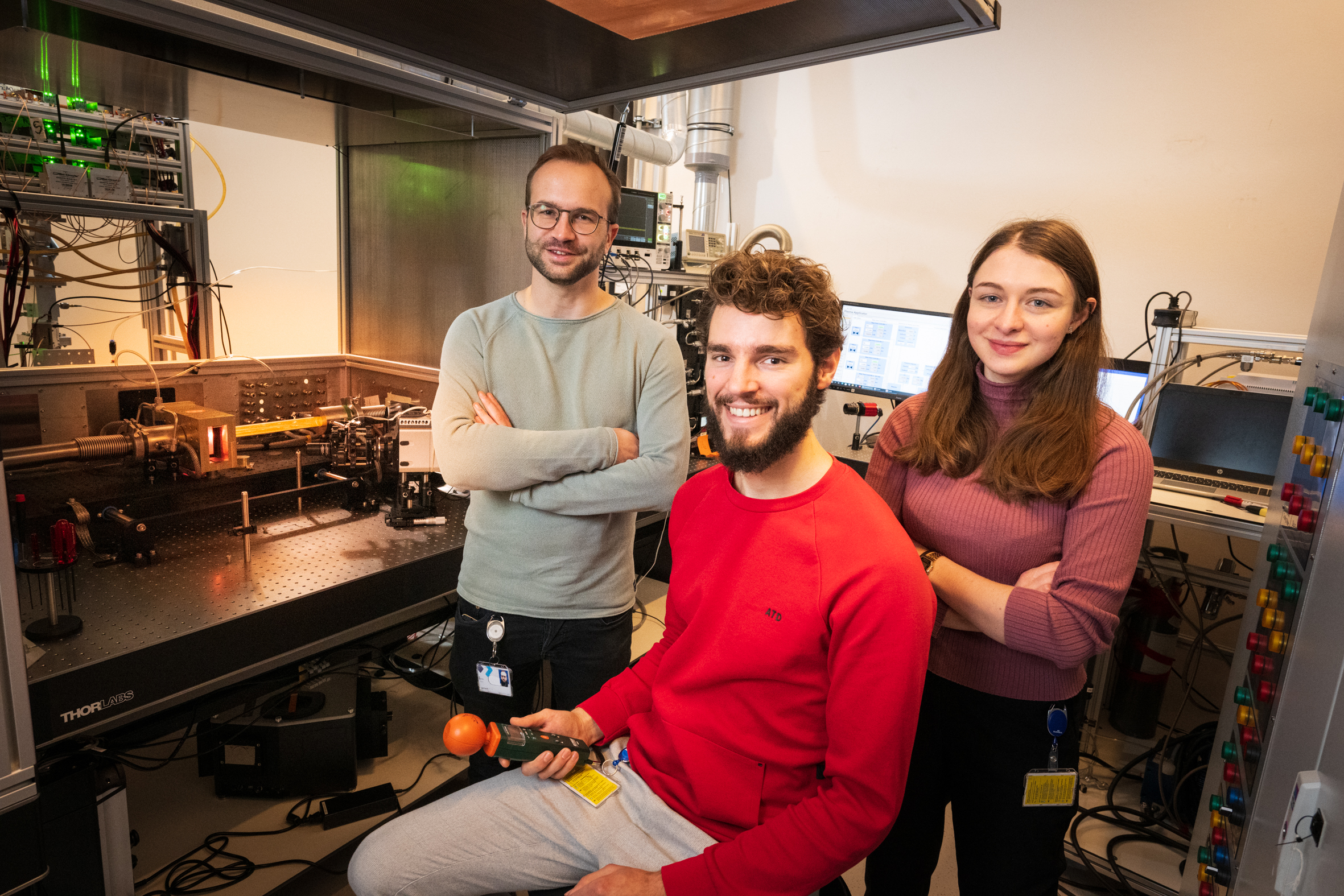 The goal of the white paper competition is to write an investment proposal in the field of electrification. “All four of us are interested in plasma and involved in the Brightsite Plasma Lab,” Ruijzendaal explains. “Given the climate goals, CO₂ emissions must be reduced. The chemical industry is one of the big CO₂ emitters. Within this sector, olefin production, the first step in the plastic production chain, is responsible for a large part of the emissions. The current production of olefins depends on cracking fossil raw materials. This is done in steam furnaces where temperatures of up to 850 degrees are reached by burning fossil fuels. During the process, methane (CH4) is recovered and used as fuel gas for the steam furnaces, avoiding emissions to the atmosphere. Switching to electric crackers, powered by renewable energy, is one way to reduce CO₂ emissions in plastic production. Implementation of electric cracking as a heat source, however, means that the methane produced remains unused. The development of e-crackers must therefore be accompanied by technologies that can make use of the methane that is no longer needed to heat the furnaces, to prevent it from being released into the atmosphere. We introduce plasma technology as a possible solution in our white paper. We compare the economic and environmental value of plasma technology to autothermal reforming (ATR), the leading technology currently being developed to address the same problem,” explains Zowi Maijer.

ATR – which uses CH4 to produce H2 – is a cost-effective production method for blue hydrogen in terms of investment costs. Its use in combination with e-crackers therefore seems attractive. However, it shifts the problem of CO₂ emissions to another stage of olefin production. CO₂ can be stored via Carbon Capture and Storage (CCS), although it involves additional operational costs and is not a sustainable solution. “ATR saves the hydrogen, but how can we also capture the carbon from CH4? That’s where plasma comes in. Our investment proposal focuses, via plasma technology, on high-temperature (>1500K) heating of the remaining methane, which drives the chemical reactions to produce acetylene and ethylene (see figure). The process produces hydrogen and, after a hydrogenation step, ethylene, a building block for plastic, without CO₂ emissions,” Ruijzendaal states.

“Whereas the advantage of plasma is that you have ethylene as a product in addition to H2 and thus high revenues compared to ATR, the disadvantage is the required cost of energy. These energy costs are lower at ATR, but there the costs for CO₂ storage and emission create additional costs and the revenues are lower because of the lack of ethylene as a product. In our proposal we show, for different (price) scenarios for CO₂, among others, that plasma and hydrogenation technology outperforms ATR in terms of variable costs and revenues. However, capital expenditure (CAPEX) is relatively high for plasma. We further describe what remains to be done in terms of plasma technology development; there is certainly room for improvement. In the Brightsite Plasma Lab, we are working hard to optimize the plasma process for ethylene production,” Maijer emphasizes.

Maria Moreira de Azevedo, PhD student Maastricht University:”I really enjoyed being part of this competition related to the electrification of industry. It was an excellent opportunity to have the big picture of my PhD project and the impact it can have on industry and society. On top of that, it was great to work as a team with the University of Maastricht and Sitech services. We could share different points of view and our multi-disciplinary backgrounds to write the white paper. In that sense, I learned many new things.

Margherita Altin, PhD student Maastricht University, agrees wholeheartedly, “I found it very refreshing to participate in this white paper contest with our team. Normally I focus on a small piece and you still miss the big picture. Here we are really dealing with the whole thing, technology as well as the business case. This helps me to see what kind of effect my research can have”.

The winning team may join Industrielinqs and Voltachem next year on the “Electro Trail Europe (ELECTE),” a tour across Europe of various electrification and electrochemical projects in Europe.

The Brightsite Plasma Lab is an initiative of Brightsite, UM and Brightlands Chemelot Campus. This unique lab is where Brightsite partners UM, TNO and Sitech Services, together with students and companies, will optimize existing plasma technology and develop new plasma processes.